We had this large group at Tracon 2011 and was one of my favorite times I've had while cosplaying! A long time being overweight this was a time that I had gone down in weight and was pretty happy thou it was a bit embarrasing with my stomach showing but also a time that I was not ashamed to show it! Which was a great feeling of relief! Of course over the years it's been jumping up and down my weight problems but not near the heaviest point that I've been, it is still a struggle but slowly I am starting to accept and like my own body...

Go and check it out at World Cosplay! And tomorrow I'll submit another Ieyasu picture and then starts a new week! Can you guess which cosplay I'm gonna post next?

Back to Ieyasu, we did also have a photoshoot in early 2012 which I have posted about, look it up here!
Posted by Ecca1 at 7:24 AM No comments:
Labels: Ieyasu, Tracon, WorldCosplay

Fabric has finally arrived! Took about three weeks, but still this is not all the fabric that me and my friend need for our Kuroshitsuji cosplays but for example the color black is almost always in stock so that's something that I didn't order... Also the lenses for Ciel has arrived! She has never worn contacts before so tommorrow I'll try to show her or more like give her some tips. Nows a good time to mention that I won't be wearing contacts, no my eyes are not blue like Alois but I'm not allowed to wear contacts...yet! Was it in february I went through eye laser surgery so I'm not allowed to wear contacts for a year, I think, but hey hurray for no more eyeglasses!!!

OH! Now is a good time to keep your eyes open on my WorldCosplay profile! I've removed the old photos and edited them so every week I'll upload a new character!

Last week was Midna from the Legend of Zelda: Twilight Princess, this was done in 2010 for an event called Bakacon, the bodysuit was bought and with the help of a friend we painted it three days before the con! I remember the stress that time hahaha, the head piece took a little longer getting the size right and finding good reference pictures about the details, but it was the head piece that got me doing Midna cause it was a challenge for me at that time.

This week I'll be posting Ciel Phantomhive that I did for a PC-meeting 2011ish? This one was also done rather quickly since the shirt just needed the frills added and the trousers were cut to shorts. As for the vest, made it for another cosplay which was never finished, glad had some use for it!
A friend of mine cosplayed Sebastian but sadly I don't look good in any of those pictures or it's more like the wig was uncut so it was too long in the front and just doesn't look good in the photos!!! Sorry Sebastian it has nothing to do with you, you are handsome hahaha but I must say I'm embarrassed that he has posted some of them, one today... Oh well if he thinks it looks good then I'll let it slip by...

So now you'll be getting weekly updates! Until I run out of pictures to post on WC, I'll try to tell something about the outfits and hopefully come up with enough text hahaha...

Posted by Ecca1 at 10:49 AM No comments:
Labels: Kuroshitsuji, PC-miitti, WorldCosplay

After two Halloween parties it's back to studying... So what did I wear?
For the first party I was Bambi/Bambi's girlfriend/mom/whatever just something cute. 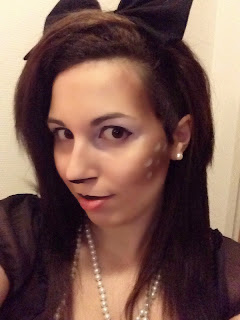 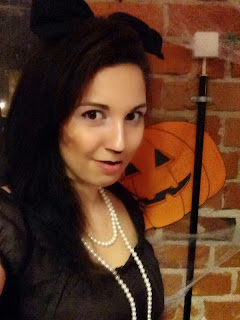 As for the second party the theme was movies so there has been one simple outfit that I have wanted to make and it is Kiki from Kiki's Delivery service! As lazy as I am, I started on the costume a couple of hours before the party so it was quite a hassle but turned up okay, still need a bit fixing... 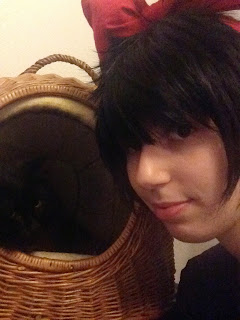 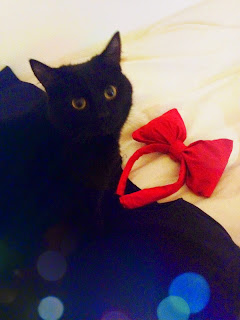 Too bad the weather sucks right now, it's not really possible to take outside autumn pictures since it has started to snow but somedays it melts away but still daylight is short too... Guess I'll need to come up with other places were to photoshoot this cosplay.
Posted by Ecca1 at 8:21 AM No comments:
Labels: Halloween, Studio Ghibli
Newer Posts Older Posts Home
Subscribe to: Posts (Atom)