Bishamon has a yukata... I don't ever want to sew something like that again! And it's not even finished xD The weird part of this is probably because I'm doing it in two pieces which I'll be sewing on togheter and cover it up with the belt, the reason why I'm doing it like this is because of the weird folding style at the lower part.

Now the upper part is ready! Shoes are also almost, they could use some more glue and paint + I might add something so that I could actually walk with them! They add 20cm lenght! It's kinda scary being 20cm taller than usual :''D 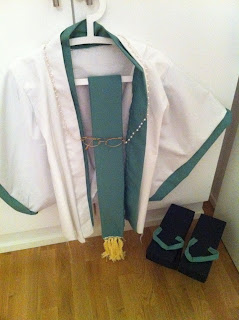 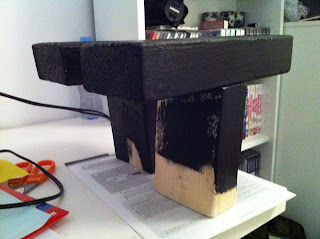 I tried walking with them, it went well when I was clinging on to a wall but when I just had the stick I was walking sooooo short steps and went well until I fell xD I did somehow manage to jump out of the shoes and land on my feet :'''DD

Also made some small jewellery parts but no pics of that yet and I got the wig yesterday! But also that one will probably get it's own post when it's ready.... Oh! also Benio's wig came a few weeks ago, gave it to our Benio cosplayer but I did take some pics of it~ I always say Benio but she'll be cosplaying the Kisshou version xD BUT if she has time she'll also do Benio <3 So our Zone-00 group will be like this: Friday Benio and Benten, Saturday Bishamon, Kisshou and Benten, Sunday Bishamon, Benio and Benten <3 Zone-00 WEEKEND <3 I won't be there on Friday so what to do :< no place to sleep and cheaper ride on Saturday x3